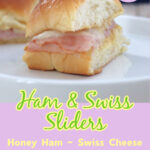 If you’re entertaining a crowd, Easy Ham and Swiss Sliders need to be on the menu. Stuffed with deli ham and sliced Swiss, then baked and brushed with melted butter this recipe can easily be doubled for a large number of people.

Pin these Ham and Swiss Sliders to make at a later date. 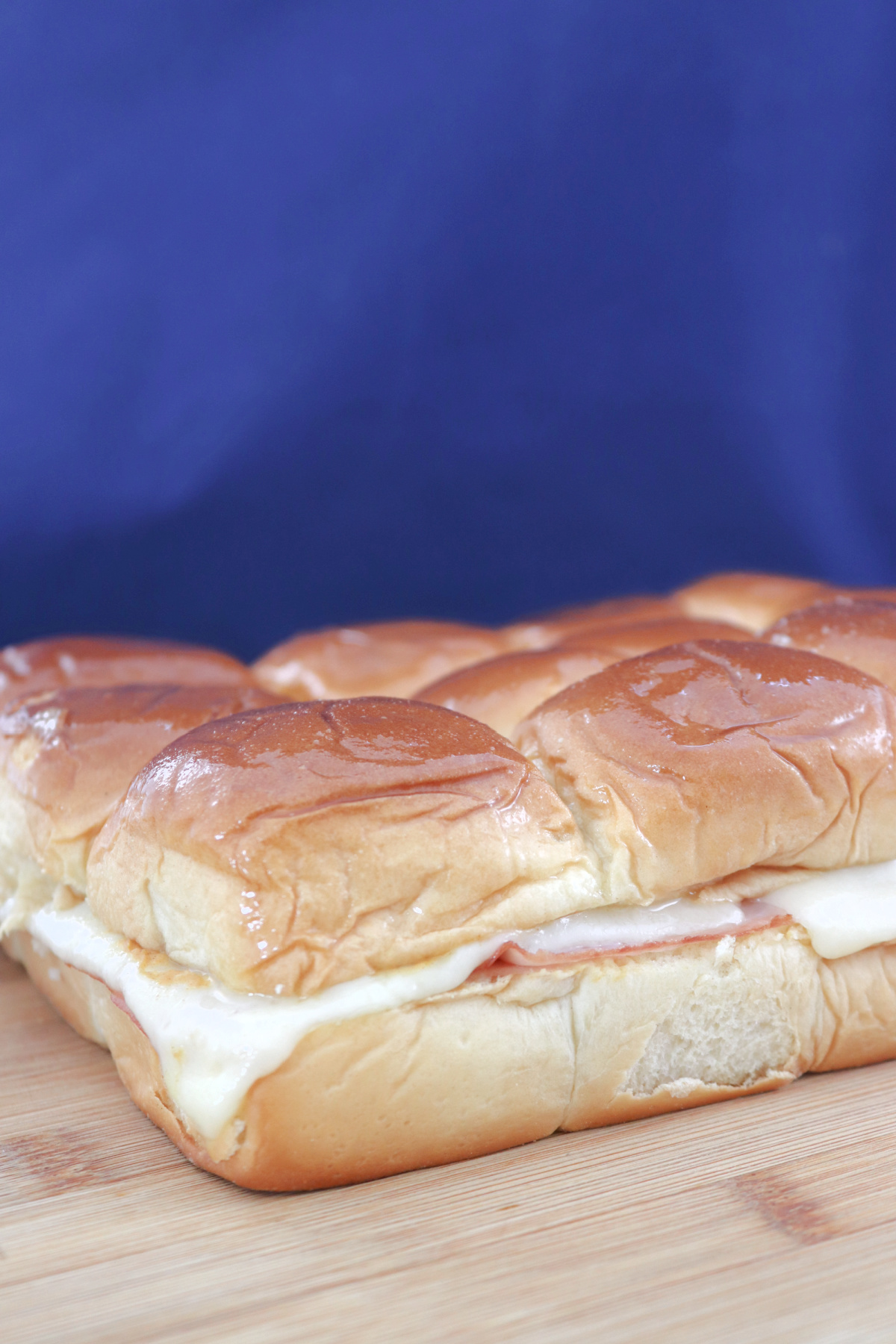 All of the ingredients for these sliders are readily available at your local grocer. I like to make these ham and cheese sliders on Hawaiian rolls. 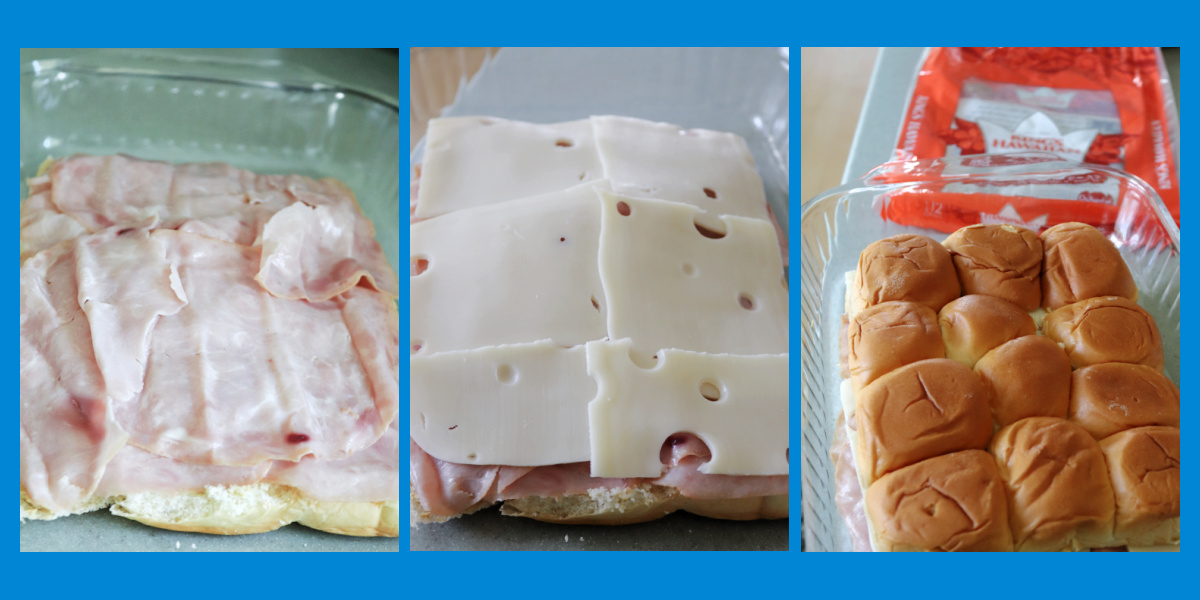 My family has really come to love sliders. I find myself making them on weekends for an easy and quick lunch.

But they are great for more than lunch. Make up a double batch for your game day party to cheer on your favorite team.

What are Funeral Sandwiches?

Funeral sandwiches are a Southern tradition that dates back to the 1700s. It’s a tradition to bring food to mourning familes when a loved one passes away. Usually there are a lot of people to serve and sliders are a great option.

Swiss is a classic cheese to pair with ham but if you prefer another cheese feel free to substitute Cheddar, Mozzarella, or even Provolone. You do want a very melty cheese.

My easy ham and Swiss sliders have no poppy seeds. I’ve gone with a plain buttery topping. I did this because not everyone can have poppy or sesame seeds.

If you want to brush the tops of the sliders with butter and sprinkle seeds over the rolls, that’s perfectly fine. Do this as they come out warm from the oven.

You could also add some herbs, such as parsley or dill, to the tops of the sliders.

If you traditionally like mayonnaise on your ham sandwiches, mix a bit of dijon with mayo and use that flavorful combination.

Honey mustard would be a delicious substitution for the Dijon. 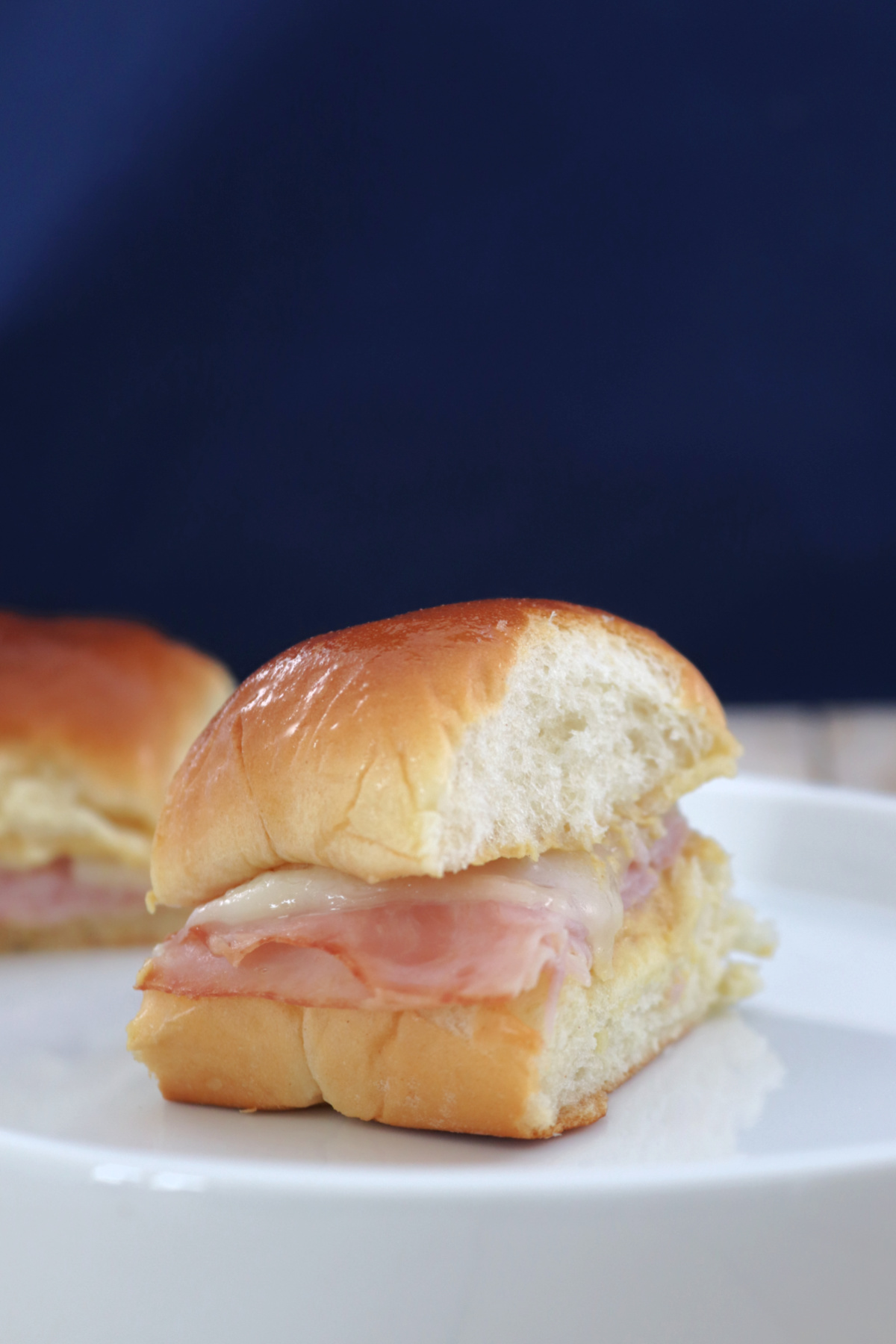 For these easy ham and swiss sliders, I used deli honey ham but tavern ham or even leftover ham from a holiday celebration could be used. What I like about deli ham is you can choose how thin or thick you’d like it sliced.

My family likes a medium to thin slice. If you prefer thinly sliced ham I suggest using a couple of slices so you get the flavor. Same with the Swiss cheese. Sometimes I use leftover Honey Baked Ham.

The Hawaiian rolls are fluffy and you don’t want to taste all bread. Initially, I put mustard on both halves of the bread but some thought it was too much. If you love mustard go for it, if not, one side might be just fine.

Can I make Ham and Cheese Sandwich Sliders in advance?

You can certainly assemble these sliders in advance but wait to bake them until you are ready to serve them.

Keep them refrigerated until you’re ready to bake them. Set the baking dish on the counter while the oven preheats. 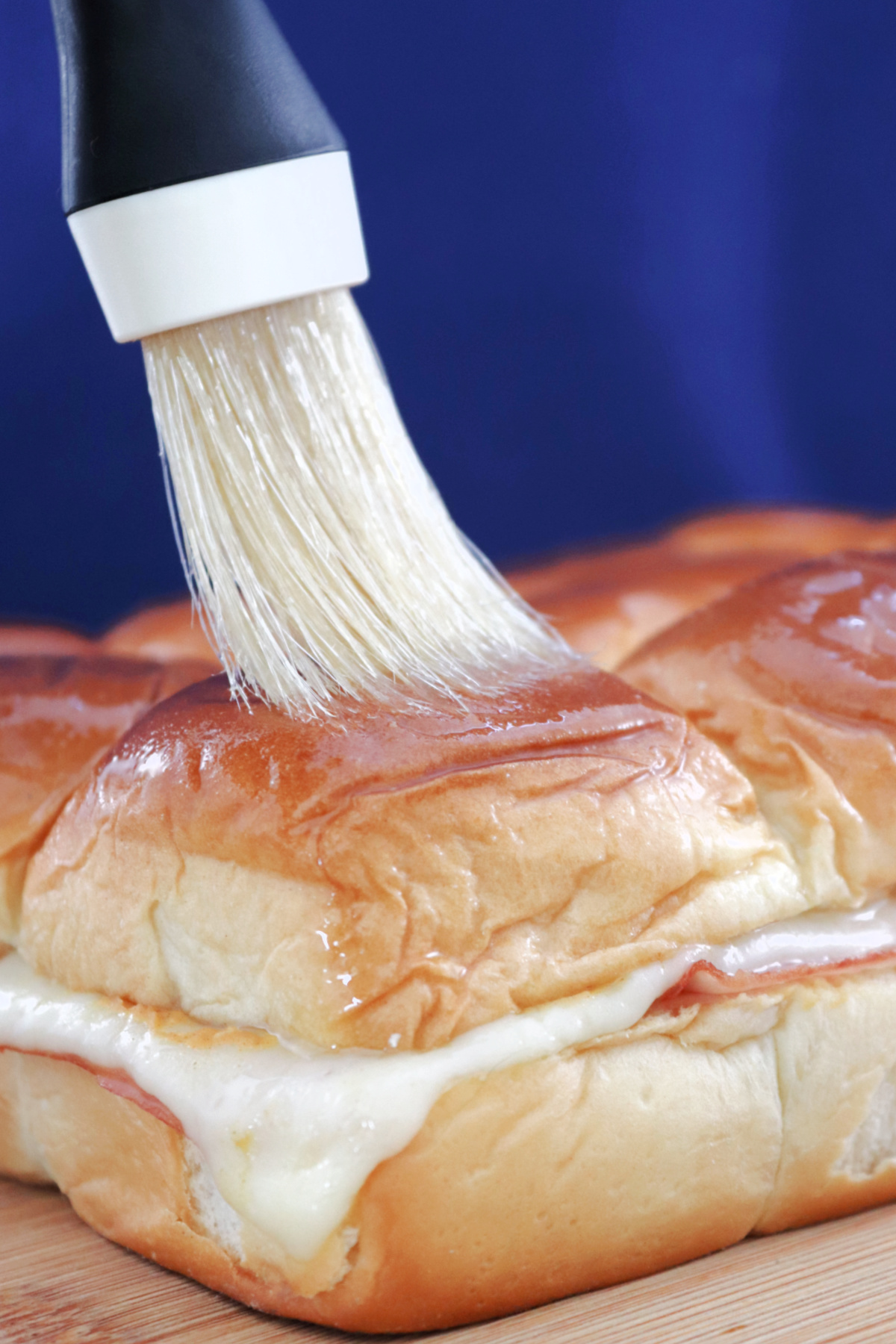 How Can I Serve Sliders?

This ham and Swiss sliders recipe makes 12 but is easily scaled for more or fewer servings.

For the three of us, I used one package of 12 rolls. The King’s Hawaiian brand also comes in a four-pack which would be perfect for a single serving.

If you are having a group of friends over, you can figure two to three sliders per guest. I usually pile them up on a platter for serving.

These would be especially good served with chili or soup too. 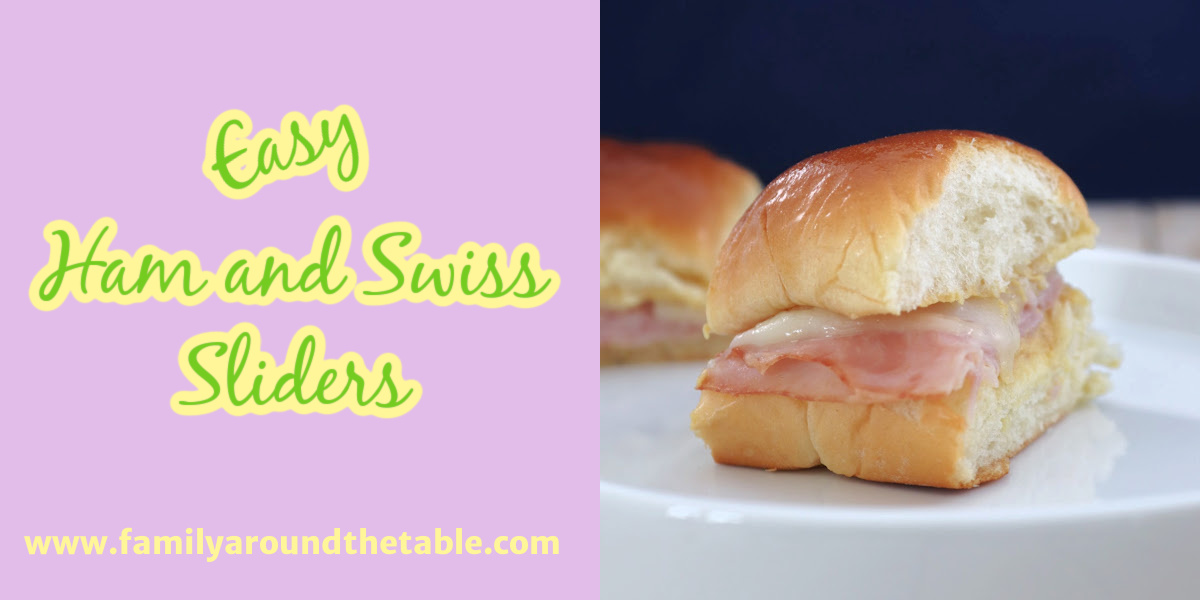 What Can I Serve with Sliders?

These easy ham and Swiss sliders can be served with a variety of side dishes. Here are some to try:

My family loves sliders while we’re watching our favorite team the Tampa Bay Lightning or really any sporting event from college football to NASCAR. I like to switch up our sliders or offer a variety which is fun for a game day party.

In addition to these easy ham and swiss sliders, here are some other yummy ideas. 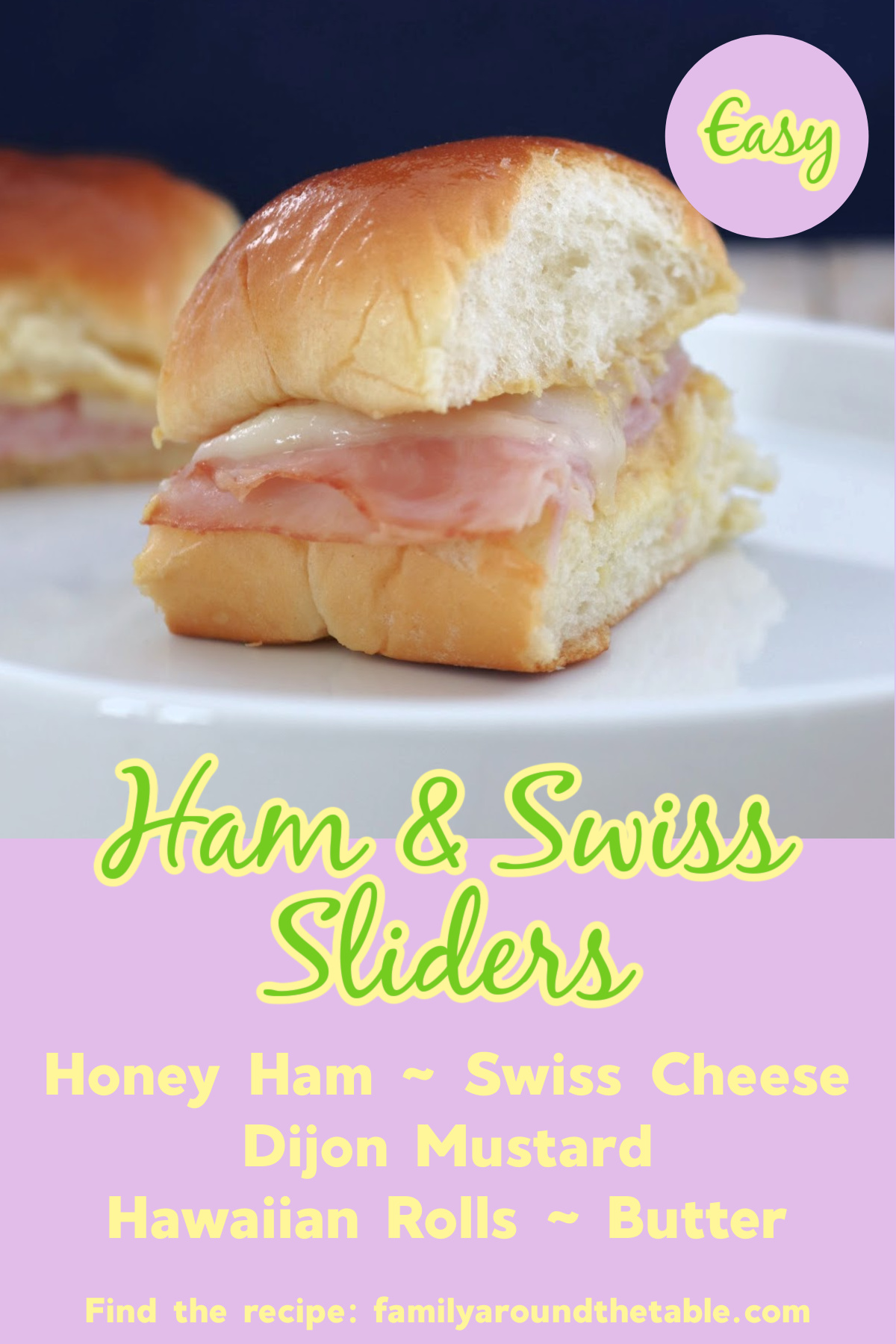 I love these! I think I might try these with Gruyère, which melts like a dream (and it's make in Switzerland!). Pinned!

Sliders are a huge hit here, too!

Yummy, yummy! I love a good slider and these would be perfect for game day!

I know I could eat 3 or 4 of these little guys.