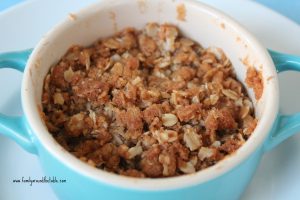 I love individual desserts and this individual apple crisp is no exception. It’s my final recipe as #appleweek comes to a close. This is one of my family’s favorite desserts and it is so easy to whip up. An individual apple crisp is perfect to make for one or many. This was originally inspired from a Taste of Home recipe that was for one serving. I adapted it for my family of four and I wrote the recipe below for four servings.

It’s not impossible to make this dessert in advance but if you choose to do so, toss the apple slices in a bit of apple juice to keep them from browning. Many people think you can only use lemon juice but apple juice is acidic too and won’t alter the flavor of the apple. Refrigerate until you are ready to assemble the crisps. The topping on the crisp is just that, crisp. While it’s really perfect just the way it is, you could add some chopped pecans for extra crunch. Toast them for more depth of flavor.

If you read my blog regularly, you know I have two boys. There was no way I was serving this individual apple crisp to them without ice cream. Apple crisp and vanilla ice cream go hand in hand, after all. Fortunately, I had vanilla in my freezer and was able to make it a la mode. I thought about it later but my Mom would have loved this dessert topped with cinnamon ice cream. It would have been a nice alternative to the vanilla. No need to buy cinnamon ice cream, just add ground cinnamon in small increments, tasting as you go along. This way you don’t add too much because cinnamon can be overpowering. You also make only what you need. She was a pretty smart cookie.

Adapted from Taste of Home